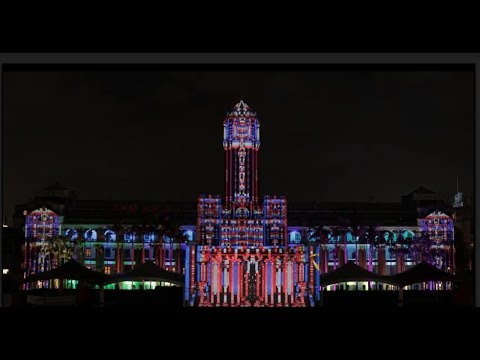 Every year, Taiwan celebrates National Day on 10 October and the projection-mapping light show on a symbolically historical building, the presidential office, is one of the biggest attractions. Barco projectors were first used for the festivities in 2017 and the result was so impressive that there was no question about bringing Barco back in 2018. On 5–10 October, excited audiences marveled at a brand-new light show centered on the theme of Cooperation, Connection and Co-existence—all made possible by our rental partner, CYCZ Group.

Barco dialed up the dazzle in 2018 to deliver a show more spectacular than anything Taiwan had seen before. Thanks to the trust and love from our partner, CYCZ Group. ‘After our experience with other projection brands, we now always choose Barco projectors for such events because of non-comparable brightness and color performance,’ mentioned the head art designer of the content provider. Barco projectors always deliver clear, bright images—and this quality wasn’t even slightly affected by the red-brick background of the presidential office building.

The projectors perform with outstanding stability every time—not even the humid weather in Taipei could affect their reliability. Two UDX-4K32 and three HDQ-2K40 projectors were installed in the front of the presidential office building, with the facade serving as a backdrop for the National Day projection-mapping extravaganza.

‘Projection-mapping on red brick wall of the historical building can be a real challenge, but Barco projectors handle it with ease and deliver brightness and clarity that never fail to impress,’ said Yichen Chiang, General Manager, CYCZ Group.

The show ran for ten minutes and played six times each evening. It was filled with adorable graphics that delighted kids and adults alike, featuring elements of Taiwanese culture such as Jade Mountain, Buddha and orchids—which are incredibly popular flowers in Taiwan. And there were special appearances by two of Taiwan’s endangered animals: the Leopard Cat and the Masked Palm Civet. The light show is renowned in Taipei; there was plenty of media buzz before it even began, which attracted a lot of families to come and have a look.

‘Perfect timing is paramount when coordinating projectors; the operating systems need to be top notch,’ said Yichen Chiang, General Manager, CYCZ Group. ‘But our job was made very easy by Barco’s first-rate technology and the shows went off without a hitch.’

Barco is thrilled to have delivered a jaw-dropping spectacle with each presentation of the light show for Taiwan’s National Day. Barco laser-phosphor event projectors, UDX series, are truly the best in the business; they deliver stunning experiences every time. Visitors to the light show and lucky passersby were treated to an inspirational work of art that demonstrated the beauty Barco projectors make possible. It was a sight that left a sparkle in every eye.